April 22, 2015 (Beachwood) – Jewish Family Service Association is pleased to announce Stanley Bernath as the Recipient of the 2015 Volunteer of the Year Award. Stanley began volunteering for JFSA in 2007 as part of the Tikkun Olam Volunteer (TOV) program. As a TOV volunteer Stanley has established friendships with several Holocaust survivors throughout the years, enhancing their quality of life with his positive attitude. Stanley added to his JFSA volunteer duties when he became a Home Delivered Meals driver. Every Tuesday he delivers nourishing meals to JFSA’s most vulnerable clients, regardless of the snow, or sub-zero temperatures!  Stanley expanded his volunteer resume once again when he began working with the Horvitz YouthAbility program. In addition to providing transportation for YouthAbility participants to special activities, Stanley also educates the group and other school children around the city about his experiences during the Holocaust.  Stanley continues to work in his own business, plays tennis weekly, travels with his family, and volunteers every day at several agencies in Cleveland. Stanley’s inspiring energy and optimistic attitude makes him an invaluable volunteer.

Jewish Family Service Association of Cleveland, a private non-profit organization, serves to strengthen families and individuals in both the Jewish and general communities in Northeast Ohio. Guided by traditional Jewish values of communal responsibility and social justice, JFSA is committed to enhancing every individual’s ability to thrive in our community. For more information on services, go to www.jfsa-cleveland.org.

If you are interested in being a JFSA volunteer, please call Sandy Lusher-Waterhouse at 216.378.3475. 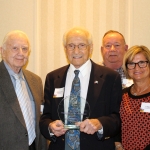